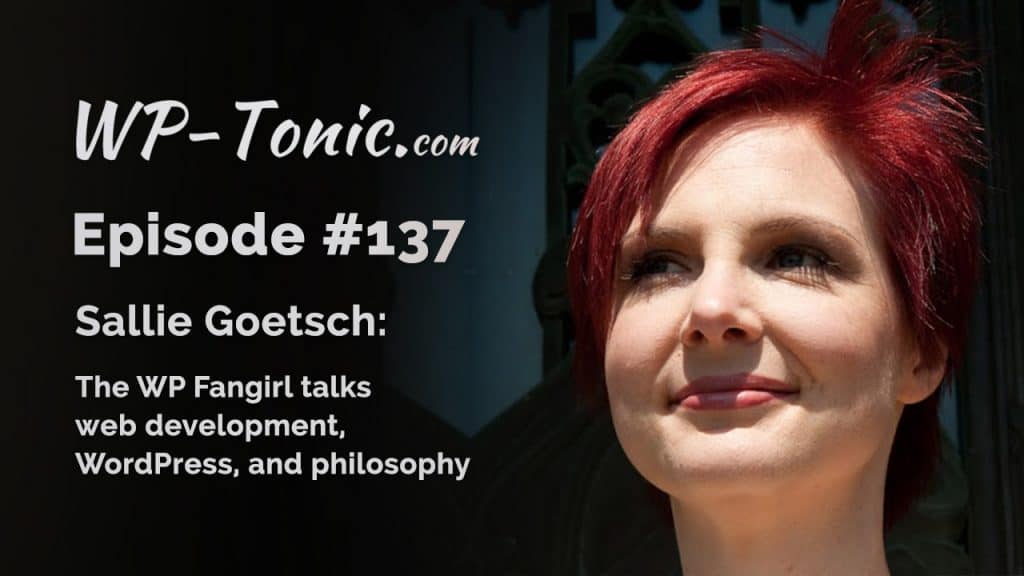 We have a great interview here with Sallie Goetsch, who’s been a regular on our Saturday round-table WordPress expert panel shows. Sallie is the lead organizer of the monthly East Bay WordPress Meetup.

Sallie tells us she first got into web development in 1993, when she founded an online journal about Greek and Roman drama, which she was publishing via FTP and Gopher. She then saw the web, and learned some basic HTML, and published the journal, which still exists today.

After a hiatus from the web when she had a career in academia, she heard a seminar about blogging in 2005, when her hosting company was offering B2, the precursor to WordPress. She had a blog on Blogger, but then moved to WordPress. PowerPress was also a fledgling product that she used, as she was heavily involved in podcasting in the early days.

Sallie is also the organizer of the East Bay WordPress Meetup. She got involved with that while living in El Cerrito, and after attending a few Meetups in San Francisco. She found there was an East Bay WordPress Meetup, which was being held in Alameda at the time. She became the assistant organizer, and finally the sole organizer. By that time, the East Bay Meetup was being held regularly in Oakland at Tech Liminal, a co-working space in Oakland run by Anca Mousiou, another past WP-Tonic guest. After Sallie moved to the Delta (halfway between Sacramento and the East Bay), she kept going to the East Bay Meetup.

Sallie has seen things change many times in web development, from having no CSS, to layouts with frames, then layouts with tables, then float layouts, and now Flexbox. In the early days, it was a big deal if your local grocery store got a website, and now you are pretty much invisible without a website. Sallie has recollections of the early days of the Web Standards movement, and feels we are still addressing a lot of the same concerns that we were ten and twenty years ago, communication and accessibility remain things we struggle with.

We spoke about how the WordPress community is better than many web communities when it comes to discrimination or inclusion. She says WordPress seems to be more welcoming of people over forty and women than the startup world.

Sallie’s advice to people just entering web development is to get a solid background in programming, and learning the basics. Even after all this time, she is just getting to the point where the work finds her. She stresses the importance of leaving time for networking and marketing. A lot of why people hire you is a personal connection, whether that is a personality mesh or a personal recommendation. She says publishing things can help people find you. She says do not waste your time on job sites that are a race to the bottom, they are a recipe for poverty. She says she has had success just going to the local Chamber of Commerce and talking to people. You never know where you are going to get clients, but the more people you know, the more chances you will have.

She advises to charge high from the beginning because you will not have the steady income you do as an employee, and you have much more overhead. John adds that many people have to leave freelancing because they do not charge enough to be sustainable.

We talked about how WordPress seems to have more women than other web communities, and relates a few anecdotes about the male-dominated world of academia. She tells of the health reasons she had to leave academia, and why she chose the path of being a web consultant.

Jonathan asks Sallie about her time living in the UK, and she speaks of the cultural differences between Great Britain and the United States. She also shares a lot of her insight on pre-qualifying clients, and whether proximity plays a large part in getting hired by clients.

Sallie talks a bit about where she sees WordPress going in the next year. In the bonus content (exclusive to the website and YouTube), we have a very lively discussion about classical Greek literature, philosophy, the difference between Sparta and Athens, and the influence of Greek and Roman literature and philosophy on modern Western culture.

This was an amazing episode of WP-Tonic (perhaps our most cultured one yet), and one you won’t want to miss.

You can find Sallie on our regular Saturday round table panel, and at WPFangirl.com.