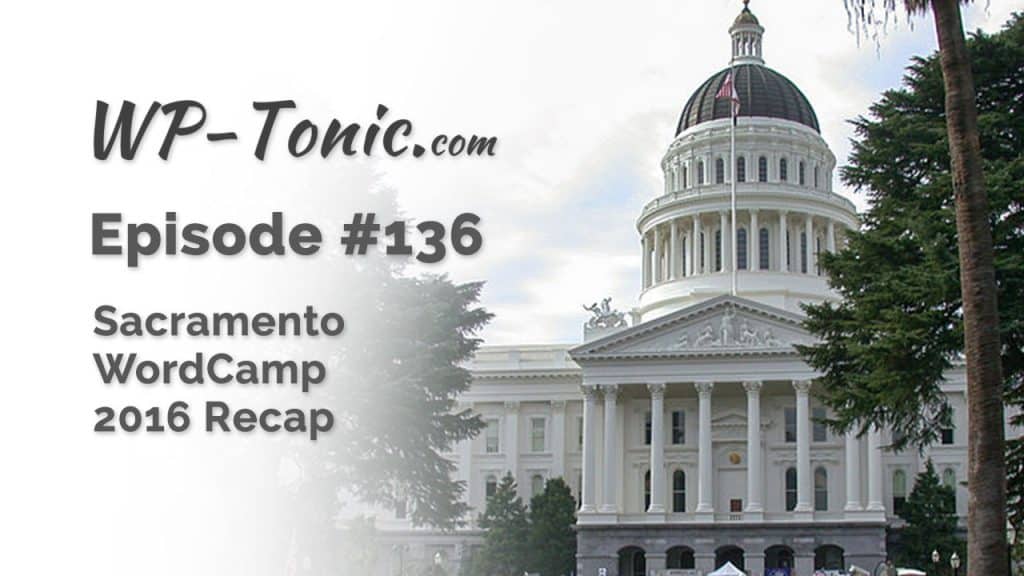 In this episode we discuss WordCamp Sacramento 2016, about half of the normal WP-Tonic round-table panel were presenting at this year’s Sacramento WordCamp event and we all had a great-time. We would like to say that Jennifer Bourn and all the main organizers plus the weekend’s volunteers did an amazing job!

WordCamps offer some of the best value possible, especially when you consider most web development conferences can cost $1000 to $2000 dollars. WordCamps are usually two-day weekend conferences (some newer ones are only one day), but they feature some of the leading WordPress experts and online marketing giants, as well as local speakers. all for $40. This is a tremendous value, and anybody who is involved in online sales or marketing should consider going to one of these events.

I had the pleasure of attending the WordCamp Sacramento 2016 last weekend and I was amazed at the quality of presentations connected to quite a number of different topics from Atomic Design to Building a Learning Platform in WordPress. These were only a sample of the topic that was discussed over the weekend.

Last year over 89 WordCamps were held worldwide. However, what can you expect from a WordCamp if you decided to attend one?

To some extent, it will be developer-focused. However, most WordCamps have two tracks: one technology (code) focused, and the second aimed at marketing, SEO, and content marketing.

This year was the second annual WordCamp in Sacramento. Last year’s event was only a one-day event, while this year’s WordCamp extended to two days. There were four distinct categories for the talks — development, design, marketing/content, and business.

In this week’s round table discussion, we examined an article by a first time WordCamp organizer in Nashik, India, which is a smaller market city in India. The article by Sanjeev Mishra echoed a lot of what made the Sacramento WordCamp a success.

It is important to have a well-established WordPress Meetup before attempting a WordCamp. The local Meetup attendees will drive the event; the event will not bring in attendees by itself. WordCamps are a direct result of the grass-roots work done to build a community first as a foundation for bigger things.

Another key point in the article was to choose a capable Lead Organizer. Jennifer Bourn worked behind the scenes to coordinate much of WordCamp Sacramento 2015, and did an excellent job as Lead Organizer this year.

Another key is to try and feature a 60/40 mix of new and seasoned speakers. Each local WordCamp thrives on putting the spotlight on local people, while having some established speakers on the bill. Part of building local WordPress communities is encouraging other people to contribute and share their knowledge.

The WP-Tonic posse was in full effect at WordCamp Sacramento 2016, as Sallie, Kim, and Jonathan all gave presentations this year. Meanwhile, John was part of the organizing team.

Sallie’s presentation was on using Flexbox for CSS layout, and was very well received. Many people were discussing later that they would be incorporating Flexbox into their workflow.

Kim’s presentation was on target=”_blank”>Building a Learning Management System and went over the steps of building a true system for online courses. (Get the slides here).

Jonathan’s presentation was a lightning talk on Podcasting with WordPress. This talk also had a lot of questions from the audience, as many people are getting into podcasting right now.

Sallie also pointed out Carrie Forde’s talk on Atomic Design and Anca Mosiou’s presentation on WordPress in the Enterprise as being exceptional. The enterprise talk was interesting because there are special considerations when working on enterprise projects.

Kim said she saw Sallie’s presentation and Chris Lema’s talk on blogging consistently. Kim said she goes to WordCamps mostly to make connections with people, and pointed out that there is power in long-term relationships.

Jonathan was there just for the Saturday session, and said Chris Lema’s presentation was quite good, as well as Sallie’s talk. He also singled out Carrie Forde’s talk as being practical, because Atomic Design because it forces people to decide what is important in mobile design. Jonathan also said Justin Busa’s talk on Advanced Beaver Builder was worth seeing. John said he found out the Beaver Builder crew is all part of Team Valor on Pokémon Go (as he is). Jonathan and Sallie said Michael Shore’s presentation on WP_Query and The Loop was quite brilliant.

John said he didn’t see a ton of presentations, but the ones he saw that he liked were Tirzah M. Johnson’s talk on project management, the James Hipkin presentation, and Kevin Howe’s presentation on growing from a freelancer to an agency.

Overall, this was a really well put together WordCamp, especially for a mid-market city. John said that WordCamp Sacramento 2017 would be either the first or third week of May next year.