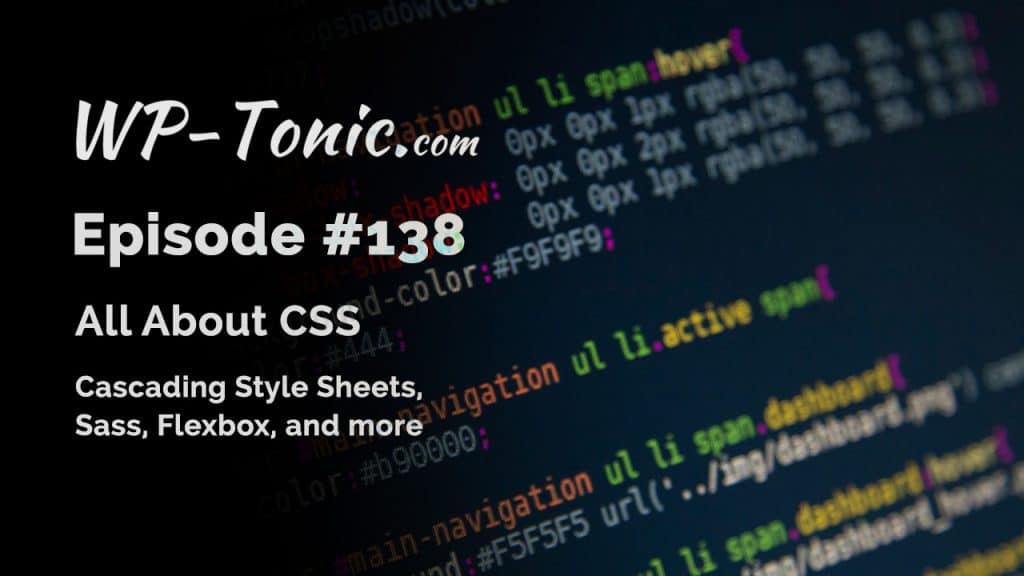 We have a great round-table here with our normal panel of WordPress experts and a special guest Alex Denning of Digital Essentials.

We be discussing a recent post that Alex had on his website called Lessons from failing to sell WordPress themes at the start of the gold rush. Our main topic this show was all about CSS from what works and what hopefully will work in the near future!

Main Topic: All About CSS

About Our Special Guest, Alex Denning 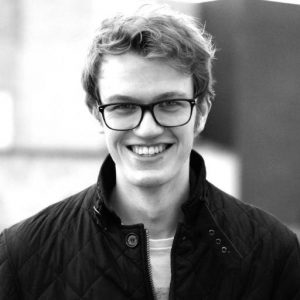 I’m a full time freelancer working from home and trying to make sense of the modern digital economy.

Each week I publish a post about Digital Essentials for web professionals, including selling products, survivorship bias and freelancing in college.

My most popular post is on deep work in practice.

These posts are practical, bullshit-free articles about working and doing business online.

If you like what I write you should definitely join my weekly newsletter where I share new stuff I’ve written, interesting new things I’ve found and fun resources.

The story going around the WordPress community this week. Wix used a ton of code from the WordPress mobile app, which under the GPL license. This means that Wix would have to give proper attribution for using the code, and make it open source, or write their own code.

In the week since this story initially came out, there has been more bac and forth between Matt Mullenweg, CEO of WordPress, and both the developer from Wix responsible for the mobile app and the Wix CEO. Everyone on the panel saw this story as a clear-cut case of not respecting the GPL license. The only question now is whether the two companies can resolve their differences, or whether the situation will go to court in the future.

In our second WordPress news story, we had Alex Denning on to give further insight to his article, “Lessons from failing to sell WordPress themes at the start of the gold rush”.

Five years ago, Alex was trying to sell premium themes as a sixteen-year old entrepreneur. The main lessons he learned centered mostly around doing the proper amount of marketing before, during, and after the product launch. Affiliate sales were something that Alex felt would have helped sales grow. At the time, he was reluctant to share revenue. Instead, he thought partnering with people to grow the overall product is something he would have done.

Another area that Alex felt could have been improved was the customer experience during checkout. He admitted that they could have spent more on software to make the checkout smoother. He said it was important to not count sales money as yours until it gets past the thirty-day mark, as people may want refunds. Five years ago, they didn’t give refunds, which he admits he would not do today.

Having an email list and building up anticipation is a huge part of the product launch. Alex says they sent an email the day before the launch, but didn’t have an email sequence leading up to the launch, another thing he would improve today.

Something the panel pointed out is relationships is why people buy the product. People are more likely to buy into a brand, and its credibility, not just the product itself. Several panelists said you must get in front of future customers several times before they remember you. Alex added your product must have a unique selling proposition, and the user experience needs to be pleasant and consistent throughout the sales process, even after the sale has been made.

Main Topic: All About CSS

John asked the panel what they found frustrating about CSS. Alex said in the past, it has been difficult to make things layout the way you expect them to, and perhaps some of the technologies coming out now may make that more predictable.

Jackie said she uses both Sass (a pre-processor) and PostCSS (a post-processor) and that makes thing easier. She said tools like the Developer Tools in most browsers make it easier to debug what CSS rules are overriding the rues you are trying to write.

Jackie and John said CSS is taking over a lot of interaction that used to be regulated to JavaScript. John pointed to Animate.css as a library that many people use for CSS animations.

Sallie, fresh from her talk on Flexbox at WordCamp Sacramento, said responsive design is the thing that has made front-end developers work harder. You must conceptualize how to move stuff around in the planning stages. Flexbox was designed to make responsive design layouts easier than they used to be. Vertical centering is one thing that is much easier now. Before Flexbox, most people were using float-based layouts. Flexbox is making things a bit easier.

Next, the discussion turned to CSS frameworks like Bootstrap and Foundation. Alex said Bootstrap is good to throw up a prototype quickly. Jonathan said some people like CSS frameworks and some people call them bloated. Alex said back-end developers seem to prefer working with CSS frameworks if they are doing front-end development. Sallie compared the love/hate relationship with Bootstrap to the love/hate relationship that developers have with the Jetpack plugin. Jonathan said frameworks of all sorts are just a tool, and you can do equally good work with or without them. John said the way that people’s minds work has a lot to do with the tools they choose, or even if they prefer front-end or back-end development.

John asked Jackie how she got started with Sass, and about her workflow. She said she started with a Genesis theme that had Sass built-in, and learned a lot from a Treehouse course on Sass. Today, she is using Gulp as a task runner, with Post CSS as a post-processor. She also uses a package for media queries when compiling Sass to CSS. Jonathan said Codekit resembles task runners like Grunt and Gulp that set up Sass and compile CSS.

The panel talked about email layouts and CSS, which would be the final frontier of universal modern CSS support. Although Gmail recently announced they would be supporting media queries soon, most email clients don’t have modern CSS support the way the web does. Currently, the only foolproof way to render emails is to build HTML tables with inline CSS.

Next, we talked about CSS Grid, which is not supported in browsers currently, but will be in the next couple of years. CSS Grid is like Flexbox, but instead of a one-dimensional grid, it is a two-dimensional grid. Jackie mentioned Grid by Example as a site that explains how CSS Grid works. This will allow for more complicated web design.

SUBSCRIBE ON ITUNES
138 WP-Tonic: All About CSS & WordPress was last modified: November 13th, 2016 by Jonathan Denwood