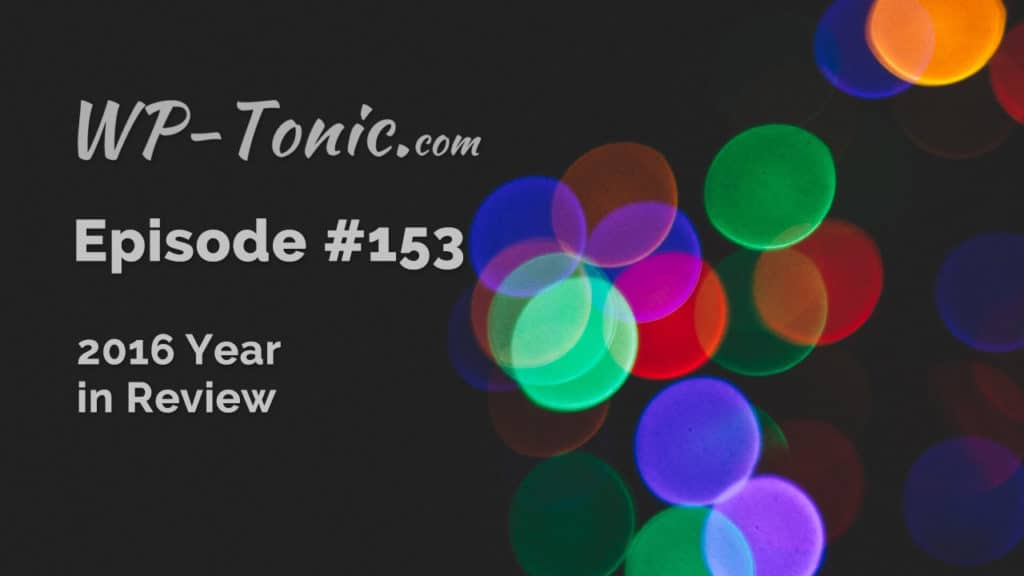 We look back through 2016 at what were the most interesting WordPress stories. Also, what guest interviews we found personally the most insightful or surprising. For me personally, the best part of 2016 connected to the show is having John Locke join the team and agreeing to be my full-time co-host.

I’ve known John for slightly over two years and I got to say he one of the most hard-working and knowledgeable guys I know in the WordPress Community.

For me, 2016 was one of those years where I look back not at how fast it went, but how much we accomplished individually and collectively. WordPress itself has 27% of the market share. The Sacramento WordCamp team put on their second WordCamp. Jonathan was gracious enough to invite me to co-host WP-Tonic, and since then, we’ve continued to put out great shows week after week.

2016 has been a real turning point for so many people in the WordPress community. We’ve seen new companies launch, and others get acquired. Many solo consultants are putting out products, and others are putting on conferences of their own. It’s an exciting time.

The biggest thing I’ve taken away from this year is that it’s never too late to begin your bold journey into entrepreneurship. (I’ve learned this with my own Sacramento web design company.) All things have small beginnings, but they can grow, if you hang in there, work hard, and believe in what you’re doing.

WP-Tonic published 78 podcast episodes this year, and we do our best to cover our favorite episodes in this 2016 year in review episode. We also look at the year in WordPress, and what major stories unfolded in 2016.

We hope you’ll continue to tune into the podcast in 2017. We’ll see you this time next year for another year in review episode.